Far From Home No More 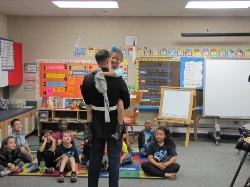 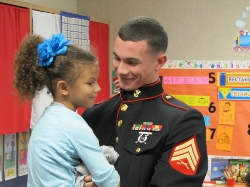 After two years overseas, local Marine returns to surprise his daughter at school
When U.S. Marine Sgt. Eddie Vargas deployed to Okinawa, Japan two years ago, he left behind a wife, Ashley, and his three-year-old daughter Ava. The kindergartener at Fannin Elementary, now five, got the surprise of her life today when Principal Ed Fellows knocked on the door and announced that Ava’s mother had a surprise for her.

In walked Sgt. Vargas, home now for good from deployments around the world that included Iraq and Japan. The priceless look on Ava’s face as she watched her father walk in the door wearing dress blues touched hearts around the classroom.

He immediately scooped her up, hugged her, and began catching up with her.

She questioned how soon they could go home and when he planned to take her shopping at the mall. Mrs. Vargas, who coordinated the surprise with Fellows and Ava’s teacher Mindy Chapa, told local media she was eager to begin life together again as a family.

“We Skyped some while I was deployed,” Sgt. Vargas said. “And we communicated by phone, but it was nothing like this.”

The family’s future includes a move to Houston, where Sgt. Vargas will begin recruiting for the Corps during his next two years of service.
http://www.kbtx.com/news/local/headlines/Bryan-Marine-Deployed-for-Two-Years-Surprises-Daughter-at-Fannin-Elementary-229322521.html
Print